This is a blog post by Amy Devenney, Product Manager – Intelligence, Jisc Licensing.

Since 2013 Jisc Licensing (formerly Jisc Collections) has been gathering and openly releasing data on article processing charges (APC) made by UK higher education institutions on an annual basis – we call this the Jisc APC Return. A standard template was developed and implemented which allowed institutions to record and monitor APC payments and helped produce comparable data. This dataset has helped Jisc Licensing monitor and understand the total cost of ownership with journal publishers and continues to inform discussions around the transition to Open Access (OA).

How is the Jisc APC Return different this year?

In 2020 Jisc negotiated 28 transitional Read and Publish agreements with publishers. These agreements combine reading and publishing activity for corresponding authors under a combined fee, so APCs for articles are rarely required with these publishers. This makes the requirements for reporting for the next period slightly different as both traditional APCs for individual articles and articles published under transitional read and publish agreements need to be reported on. As a result, we have made some amendments to the reporting process and template.

How are Jisc helping improve reporting on open access publications?

As part of the transitional Read and Publish agreements, publishers are required to provide article-level metadata directly to Jisc for any output by an author from a subscribing institution accepted for publication under the agreement. This requirement was initiated after previous research carried out by Jisc and the Knowledge Exchange highlighted the need for publishers to provide metadata to support the monitoring and evaluation of the transition to OA. The project resulted in the creation of a working template for publishers to record key metadata fields for each output.

Over the last year Jisc Licensing’s Intelligence team have worked with publishers to implement an efficient process for collecting metadata on all outputs from transitional agreements using this template. Once the data has been provided by publishers, the Intelligence team cleans the data and enhances it using the Crossref API to complete any gaps in the fields provided. This data is then used to drive and inform the work of Jisc Licensing by providing insights on the impact and value of transitional agreements. 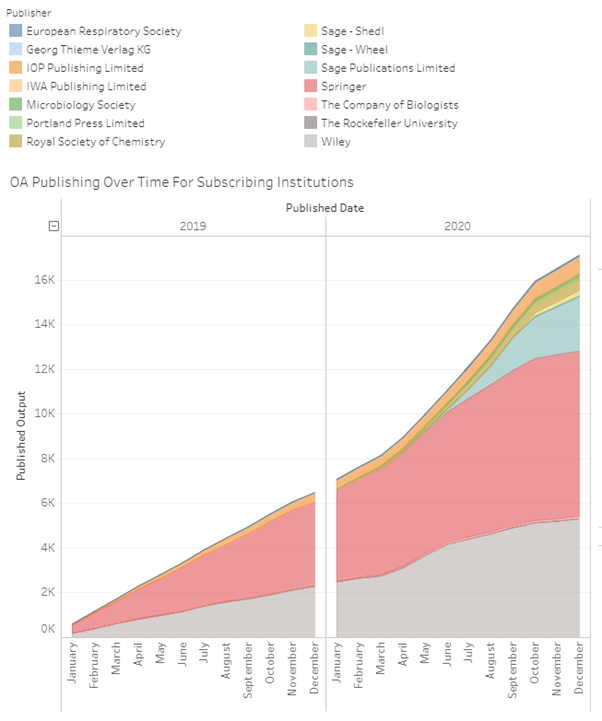 Data source: Article-level metadata for all outputs published under 11 transitional agreements by subscribing institutions provided by the publishers directly to Jisc.

However, we know that outputs published under transitional agreements reflect only a proportion of the publication activity of UK academics. The Jisc APC return is therefore crucial for us to holistically understand where UK researchers are publishing, and the costs involved, to enable us to continue negotiating agreements that benefit the sector.

How does this affect the Jisc APC data collection?

Using the datasets received from publishers, for the reporting period April 2020 – March 2021 Jisc will provide metadata for all outputs published through a transitional agreement to institutions for verification. This will be provided in a spreadsheet direct to the institution and it will be separate to the Jisc APC template. We ask that institutions verify this data before returning it to us as part of the Jisc APC return.

We have also amended the Jisc APC template to reflect the growing number of transitional agreements and are asking institutions to provide information on the amounts that have been used from UKRI and COAF block grants to contribute to these agreements.

We still require metadata on other OA publications that attracted an APC and ask that institutions report on these in the same template and in the same manner as previous years.

What can institutions expect in the coming months?

The final deadline for this reporting period (April 2020 – March 2021) is 31st August 2021. We ask that institutions planning to participate let us know if there will be any delay in providing their data by this date.

The Intelligence team are working with publishers of transitional agreements to collect and clean metadata for this reporting period (April 2020 – March 2021. This data will be shared with institutions by 31st May 2021.

The following publishers have confirmed that they will provide us with the article-level metadata for the reporting period:

If you’d like to find out more about this work or are a submitting institution with specific queries, please contact jisc.apc@jisc.ac.uk.

This website uses cookies to improve your experience while you navigate through the website. Out of these, the cookies that are categorized as necessary are stored on your browser as they are essential for the working of basic functionalities of the website. We also use third-party cookies that help us analyze and understand how you use this website. These cookies will be stored in your browser only with your consent. You also have the option to opt-out of these cookies. But opting out of some of these cookies may affect your browsing experience.
Necessary Always Enabled

Any cookies that may not be particularly necessary for the website to function and is used specifically to collect user personal data via analytics, ads, other embedded contents are termed as non-necessary cookies. It is mandatory to procure user consent prior to running these cookies on your website.