At Jisc we’ve been committed to open research practices for years. Recent events have highlighted again exactly why all this matters. The ongoing COVID-19 public health crisis demonstrates our global connectedness and we’ve all seen that opening up research into the virus has enabled a global research and development effort to develop vaccines and treatments.

Our open research team works nationally and internationally to influence policy in favour of open scholarship. We partner with like-minded organisations around the world to develop services that support open approaches and to build the plumbing for the new processes, links, standards, workflows, policies, and incentives.

European countries, including the UK, have been at the forefront in developing open scholarship and we have played an active part. For example, we have been a partner in OpenAIRE since its inception, working to shift scholarly communications towards open practices and make scientific knowledge available to everyone. Some OpenAIRE services engage directly with our own such as Sherpa Romeo and IRUS-UK  and we are always looking at ways of bringing more services together, for example our Publications Router with OpenAIRE’s Publications Broker.

Jisc is one of six European partners working together in the Knowledge Exchange (KE), first on OA monitoring, pre-prints, and OA monographs and now focusing on two areas of work: persistent identifiers (PIDs) and an effort to help smaller publishers transition to open access. These projects have led to collaborative work between Jisc Collections and the  Operas project, a pan-European initiative focused on open scholarly communication for social sciences and the humanities. Our staff sit on the board of Sparc Europe, working the European Commission (EC), European research institutions, universities and other interested organisations to influence open policies.

Now, more than ever, repositories are a fundamental enabler of research impact and knowledge dissemination, and we are confident that our collaborative efforts will give the repository community fair representation.

Working with partners across the world

Open scholarship is a worldwide enterprise and we collaborate with partners and initiatives across the globe. For example, we are an active partner in the Reimagining Educational Practices for Open (REPO) project, seeking to understand and normalise current global open scholarship practices within the research ecosystem.

We’re developing some of our existing services to extend their reach and relevance. For example, over the last 12 months, from February 2020 to January 2021, we have increased the coverage of publications in Sherpa Romeo from countries in South America – from 582 to 675, an increase of 16%. 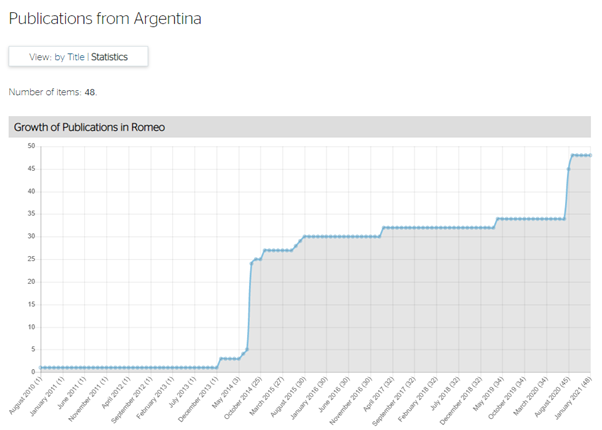 Where next for our open research work?

We are starting a new collaboration with Mir@bel, supporting a similar project to increase the amount – and enhance the accuracy – of data held in Romeo for French journals.  Mir@bel is working to ensure that French policy data is collated, fully accessible and available in French, and we are looking forward to working with them to achieve this.

With the Open University (OU) we have a project called CORE, which is the world’s largest aggregation of OA content. CORE has a strategy to integrate its data with other global services such as library discovery services, archives, and other academic services to make repository content more discoverable. The CORE recommender is integrated with La Referencia, the national aggregator for South American countries, and engaged with the European OpenMinted initiative to create global infrastructure for text and data mining.

We’re also pushing ahead with a collaboration to further our drive to make open access the default way to publish publicly funded research. Alongside UKRI and the Wellcome Trust, Jisc recently signed up to engage with the Open Access Switchboard (OASB), an international initiative to create a central information exchange hub. The OASB, created by the Open Access Scholarly Publishing Association (OASPA), is “a not-for-profit collaboration between funders, institutions and publishers which aims to reduce complexity and the administrative burden for all stakeholders (including, indirectly, the researcher) by streamlining the communication between funders, institutions and publishers”. Jisc and the OA Switchboard have established an agreement allowing UK universities who are Jisc members to use the service for free.

Jisc is now involved in a new project called EOSC (European Open Science Cloud) Future, which aims to unlock the potential of European research through a vision of Open Science for society by bringing together all major stakeholders in the EOSC ecosystem to help break down disciplinary and community silos and consolidate key project outputs. The project begins late April/early May, but we’re running a webinar on the 26th of March 2021 to help explain what the EOSC is and how it can benefit research.

Jisc’s vision for open research is for the process and the outputs of all research to be as open as possible, as early as possible, so that information can be a benefit to everyone. International efforts around open research help to support our mission of creating a process that is timely, cost effective, sustainable and compliant. Just as importantly, international efforts underscore the need for Jisc and the UK to remain collaborative and experimental to meet the changing needs of the global research community.

Continuing our engagement with partners and stakeholders around the world helps everyone to remove barriers to the access and reuse of vital research and to embed open practices into how we all live and work.

Find out more about our open research services here.

Why not register for the Jisc/CNI conference? It’s happening virtually, 7-9 July 2021.